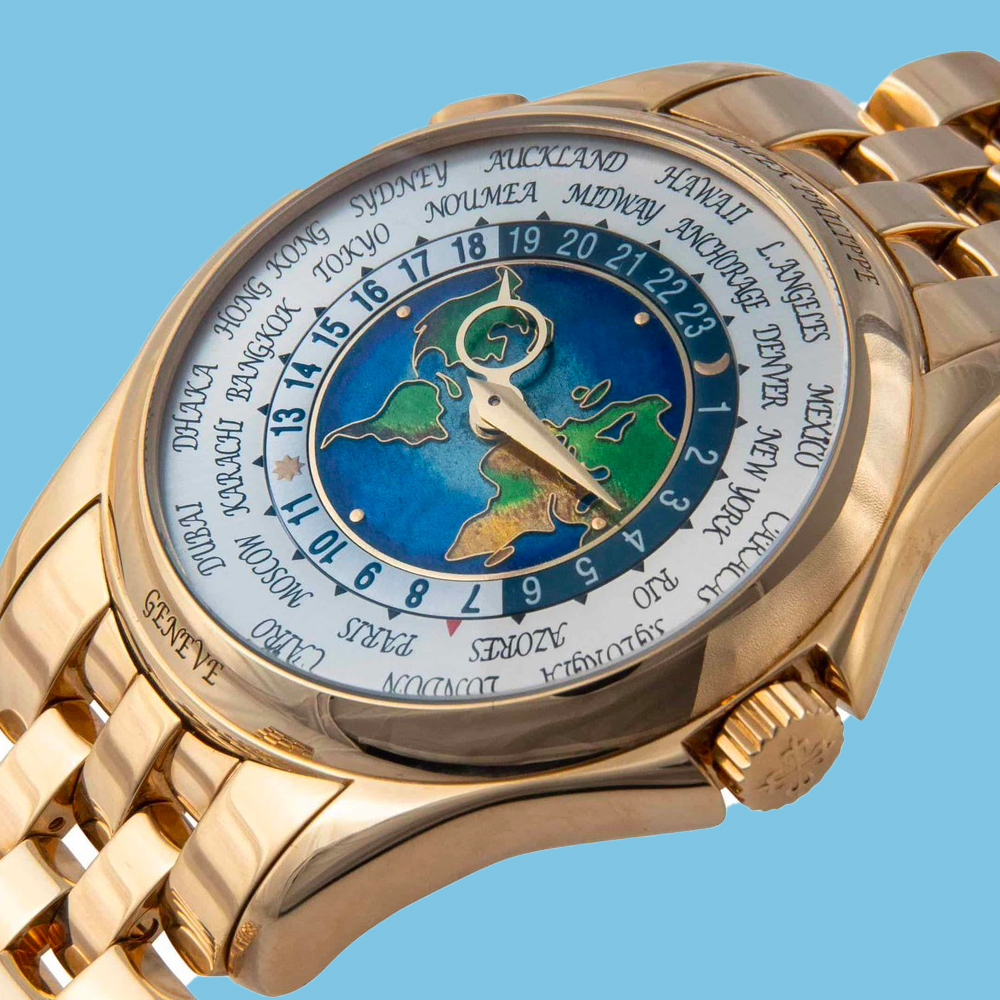 A curated selection of Important Modern & Vintage Timepieces and Jewels

Antiquorum HK Office (April 30th, 2020) — On Sunday 10 , Antiquorum, the world’s premier auctioneers of modern and vintage timepieces, established in Geneva in 1974, will host a premium online auction for the second time of the year.
Indeed, earlier, on March 21st, Antiquorum became the first major auction house to host a confined auction broadcasting online in response to the Coronavirus Pandemic.

Adapting to Hong Kong timezone and agenda, the online auction will be transmitted live in two sessions, the first session will start at 5pm HK time (or 11am GMT+1) and the second one will start at 8pm HK time (or 2pm GMT+1) with the particularity of presenting two sessions thoughtfully balanced in terms of lot assortments allowing the bidding audience to join, leave and come back to their screen in a timely manner.
Antiquorum experts naturally realized that the traditional bids and lots flow has to be adjusted to the online format of the Hong Kong auction to make it assimilable and enjoyable.

Session 1 will begin with an elegant selection of Chopard watches from lot 24 to lot 65, followed by a fantastic assortment of Rolex timepieces from lot 80 to lot 98 with the exception of lot 84, a nonetheless interesting Tudor – Ref. 7928; “Submariner”; so-called by collectors “Pointed Crown Guard, Meter First Dial” with “Rose logo” in stainless steel.

The Rolex assortment will thrill bidders particularly with a pick of rare and colorful Daytonas that will for sure supplement with panache their collection. 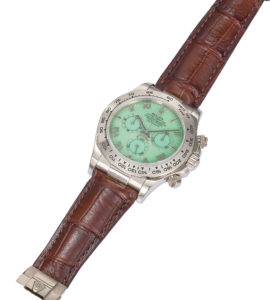 Antiquorum experts are also proud to present during this session 1, a fine choice of pocket watches and clocks including two notable timepieces for those who are keen on historical ownership pieces:

Lot 107, a 18K yellow gold historical Longines presentation heavy pocket watch with chronograph and minute recorder, cal. 1973 “high-class” balance-spring. The cuvette (dome) of the pocket watch has the specificity to be engraved with “Zum Andenken / an / Herr Sulzer Steiner / 1837-1906” meaning in German: “In memory of Mr. Sulzer Steiner, 1837-1906.” 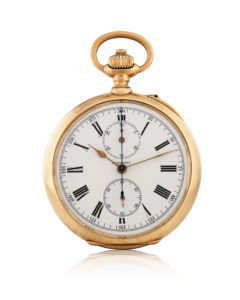 The presentation watch was offered to the Sulzer company as an acknowledgment to Heinrich Sulzer-Steiner on October 16th 1906. The latter, a Swiss fourth generation of one of the most important Swiss foundries of the 18th century, created the first diesel engine prototype in 1897 and was a pioneer in the development of this technology in the first half of the 20th century.
In 1883, he co-founded the Swiss corporation of machine builders and he was awarded an honorary doctorate by the Karlsruhe Polytechnic in 1903. At the time of his death, in 1906, the Sulzer company had more than 3 500 employees in Winterthur and some 1000 in Ludwigshafen, near Mannheim, Germany. In 2010, the Sulzer Group had a turnover of 3.18 billion Swiss francs, with more than 160 subsidiaries and 13 740 employees worldwide.

Another intriguing origin is the lot 117, a 18K yellow gold historical Art Nouveau Longines pocket watch. This watch was invoiced first on October 30th, 1909, to the Longines agent, Maison Djezvedjian, Istanbul, Turkey [Nacib K. Djezvedjian & Son, Constantinople] and returned to Switzerland to be sold on July 15th, 1911, to Mr. Baptiste Savoye (1851-1927), Director of Longines at that time. He was the father of Maurice Savoye (1881-1965) and the grandfather of Frédéric Savoye (1916-1993), both Longines directors at their time. 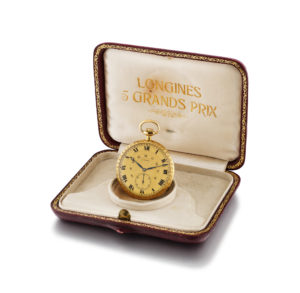 The first session will end by a selection of modern pieces such as the compelling 18K white gold Patek Philippe, (lot 130) Ref. 5270 G “First generation”, chronograph; “double sealed”. The production of this reference started in 2011 (launched at BaselWorld 2011) succeeding the line of perpetual calendar chronographs that began in 1941 with references 1518, 2499, 3970 and 5970. The first generation of references 5270G-001 does not feature chronograph scale (satiné silver dial with applied faceted oxidized gold baton indexes). 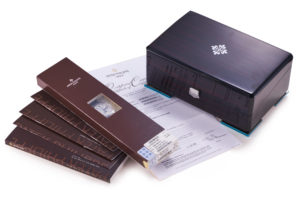 As one of many Antiquorum fields of expertise, the session 2 will start by fine and cleverly priced pieces unearthed by the international expert team.

“It is key for us to keep offering intelligently priced pieces. We have a wide network of experts looking for interesting opportunities and it’s our pride to prove our authority from hard-to-find watch accessories, through every day watches up to the most desirable and precious masterpieces.”
Romain Réa, Antiquorum CEO. 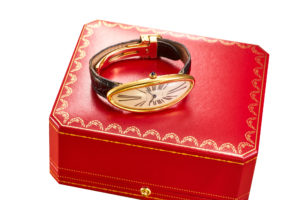 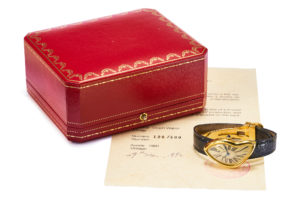 A trend to be confirmed with the exceptional selection gathered from lot 196 to lot 207, as well as lot 372 Rolex Ref. 16520 “Oyster Perpetual” “Superlative Chronometer” “Cosmograph” “Daytona”; retailed by Tiffany & Co. 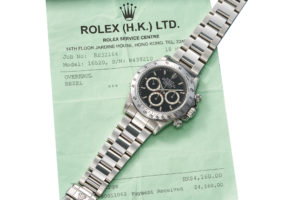 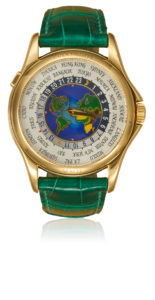 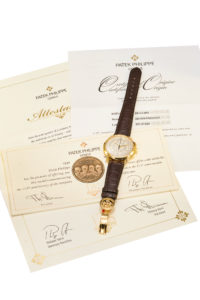 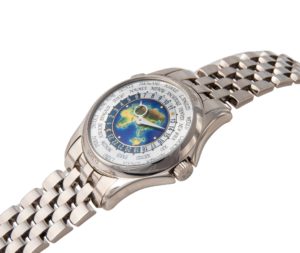 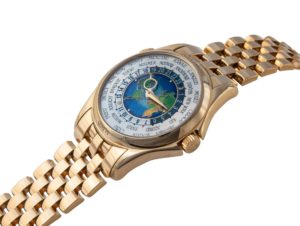 Session 2 will proceed with the most sought-after timekeepers, such as lot 305, “Jules Audemars”, “Grande Complication Automatique” from Audemars Piguet ref. 26 023 OR.oo.113 OR.0, a skeleton automatic movement featuring a minute-repeater chronograph, perpetual calendar, leap year indication and moon phases the 44mm pink gold case is integrated with a gorgeous 18k pink gold bracelet, definitely a wristwatch to be worn and admire everyday by its lucky owner. 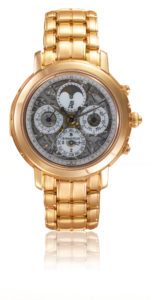 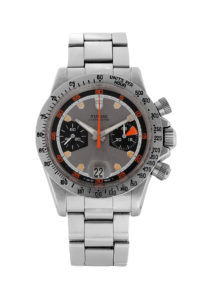 The auction will keep going on with the fine and very rare, stainless steel Rolex – Ref. 8171 (lot 382), oversize triple date à guichets, moon; “Perpetual” “Precision” so-called “Padellone”; self-winding astronomic wristwatch with day, date and moonphase.
Referred to as the “Padellone” (the Italian word for “large frying pan”) due to its 38mm dial considerably larger than other models at the time. It is one of only two Rolex models to boast a moonphase indicator and only steel models feature the lettering “PRECISION” on it.
The reference 8171 is one of the most in demand vintage Rolex watch on the market. Many consider this reference the ultimate connoisseurs watch due to its rarity and elegance. 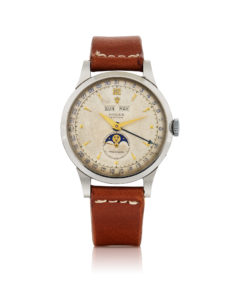 Antiquorum is proud to also showcase during this Hong Kong auction some watches combining Swiss watchmaking know-how with the most intricate jewelry setting technics with the examples of lot 304 and lot 401. 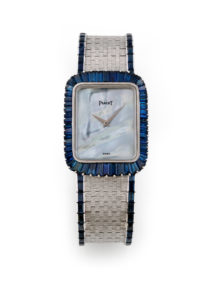 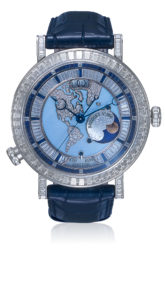 To conclude this auction, Antiquorum, which opened its first jewelry department six months ago, will unveil a selection of fine jewelry pieces from the most prestigious jewelry maisons. A large choice of exquisite Cartier lots but also Adler, Boucheron, Bulgari, Chopard, Mikimoto, Tiffany & Co and Van Cleef & Arpels. Collectors will also be thrilled to find some rare and first-rate stones provided with certificates. 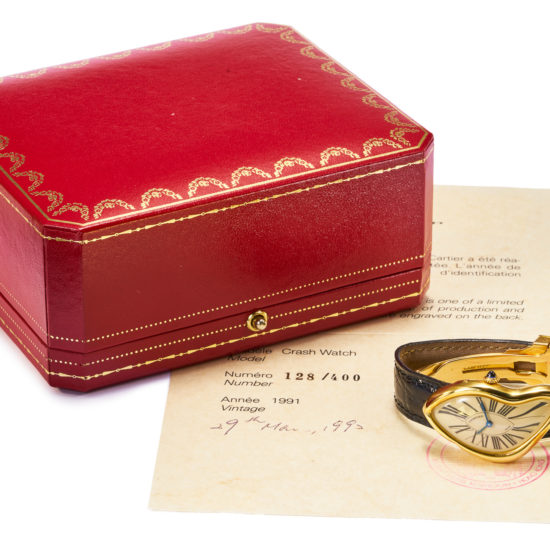